The Netherlands ready for autonomous shuttles

The Netherlands is ready to let independent shuttles drive through inner cities at low speed. This is stated by Professor Bart van Arem of Delft University of Technology. Autonomous vehicles that are used as first and last mile solutions are already driving at various locations in our country.

Shuttles contribute to accessibility, traffic flow, traffic safety and less pollution. Developments are proceeding at a rapid pace and the number of applications continues to increase.

Rotterdam and The Hague
The ParkShuttle in Rotterdam is currently being expanded over a longer route and will create a connection between the subway station Kralingse Zoom, business park Rivium and the watertaxi. This renewed shuttle will also deal with mixed traffic. A special development worldwide. Financier Metropoolregio Rotterdam Den Haag (MRDH) and developer 2getthere collaborate in the project. In The Hague, The Future Mobility Network, HTM and Rebel co-operate in the Shutte BV. Here, an autonomous shuttle is the last mile solution for visitors to the Haga Hospital. This shuttle will run for at least four years, with the presence of a steward. In June, a trial will start where an autonomous vehicle will drive in the parking lot of the hospital.

Safety
To ensure the safety of autonomous shuttles, the systems contain sensors. Many scenarios have been demonstrated in a safety case and various solutions have been proven and tested at the Researchlab Autonomous Driving Delft or in the factory of the developer. However, it is not yet conceivable that autonomous vehicles will drive without supervision. There is a supervisor on board who can intervene in unexpected situations. Nevertheless, we are already implementing supervision using radar from a control room, such as in Rotterdam.

Public space
When shuttles continue to travel longer distances and interact with other types of transport, infrastructural changes are required, such as new road sections or road widening. By examining how pedestrians and cyclists react to shuttles and by determining where cameras and additional traffic lights are needed, the manufacturer can adapt his vehicle or the environment. Sometimes parking locations have to be moved to prevent parked cars from blocking the view of the sensors. Autonomous vehicles require a different layout of the public space. The focus is no longer on transport, but on the user and the environment.

Strength of the region
Partners working on autonomous transport can develop new knowledge together. To make vast steps and learn more about autonomous transport, experts recommend operating at a regional level. In addition to Rotterdam and The Hague, there are also regional partnerships in Eindhoven-Helmond and Amsterdam. At a national level, forces are also joined, but in the region you are closer together and you can switch faster.

Autonomous transport in your city, region or business park?
Curious whether automated public transport is also possible in your area? In the two-day course Automated public transport of PAOTM and The Future Mobility Network you will learn everything about planning, implementation and operation of autonomous shuttle transport under the guidance of ir. Joop Veenis. You receive tools to make informed plans and decisions and you will be able to evaluate automated shuttles and their use. 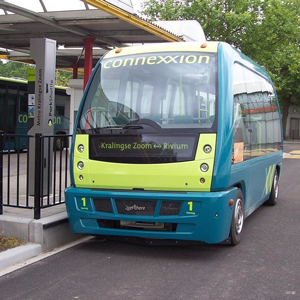