Simulations of system dynamics are essential to guarantee the operation and reliability of many of today's mechanical systems, machines and mechanisms. The field of multibody dynamics focuses on the realistic simulation of the movement of complex dynamic systems and the resulting reaction forces in hinges and couplings. The starting point here is that the movements of individual components can be large and that therefore geometrically non-linear effects must be considered.

First, multibody dynamics provides engineers and designers with a better understanding of how a complex dynamic system works. In addition, the simulated accelerations and reaction forces can be used as input for strength and fatigue calculations of individual components. The multibody model can also be easily reused as a mechanical model in a control analysis.

During this course, the theoretical background of the so-called Floating Frame Formulation will be discussed. This formulation has become known in recent years as the way to describe system dynamics. An important advantage is that complex phenomena such as contact mechanics, flexible behavior of individual components and other multi-physics effects can be relatively easily added to existing models.

The course consists of 3 days on which theoretical aspects will be discussed. In addition, participants themselves get to work setting up multibody dynamics simulations. You can use Matlab (if you have a license yourself) and / or Python (open source) for this.

Day 1: Kinematics
• Establishing a kinematic model of a system consisting of several rigid bodies in terms of generalized coordinates.
• Establishing the correct kinematic constraints due to hinges and other links.
• Doing numerical simulation of kinematically driven systems by means of position, speed and acceleration analysis.

Day 3: 3D & Applications
• The translation from 2D to 3D techniques with particular attention to the description of large rotations in 3D and the consequences for the previously discussed simulation methods.
• Applications of the method on the basis of practical examples: flexibility, control technique and subjects at the request of the participants.

The introduction course Multibody Dynamics is intended for mechanics, designers and calculators who are active in machine dynamics or structural dynamics and who want to know the added value of multibody dynamics compared to linear finite element simulations and for people who already make practical use of multibody software and want to delve into the theoretical background. In addition, the course is also suitable for electrical engineers and mechatronic designers who want to know more about the typical mechanical models used in control engineering environments. 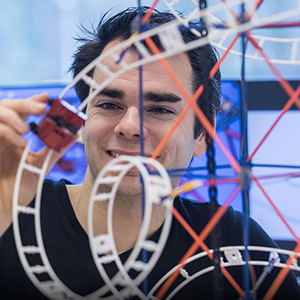